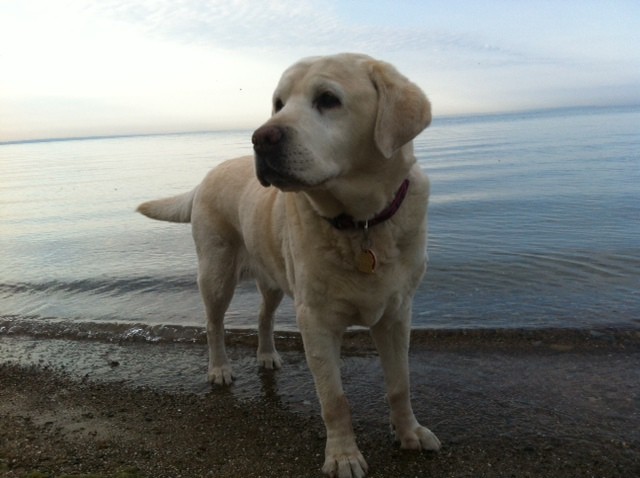 I believe that every pet is chosen for us, comes to us, to teach us lessons – lessons that we need to learn, lessons to make us whole, lessons to help us become the people we are meant to be. Our job as pet owners and caretakers is to listen closely enough to our pets to learn what they have to teach and to bend our lives to live closer to their lessons.

Over 13 years ago, Poppy was a surprise birthday present for Carolyn, coming to us from a client who could not keep her due to allergies. This sweet little yellow lab was nearly 3 years old when she joined our family (she even shared a birthday with our Aunt Delight), and Mia and Jo cannot remember a day without her.

Poppy was never an athlete. She never chased a ball or stick. Nor did she fetch. She never swam. She preferred to stand in the shallows on a hot summer day. On the rare occasions when she did chase squirrels, it was for five or six exuberant steps to show she could, but then Poppy would pull up short before her prey proved she was not the hunter she knew she wasn’t. Poppy never showed shame; she declared victory early. I think she considered herself above those sorts of games. Besides, all that running around business would have put her farther away from where she wanted to be, which was next to us. That’s where she belonged: in the shade of your beach chair, or by your feet watching TV, or behind the front desk of the animal hospital. In her lifetime, Poppy “worked” at the front desk of four animal hospitals including Lancaster, Blue Cross, Camp Road and, for the last ten years, Ellicott.

Walmart’s greeters had nothing on Poppy. In her younger days she had an uncanny ability to find the owners without pets in the lobby and nuzzle in for some lovin’. This, of course, was just what the doctor would have ordered, because often the person without a pet in an animal hospital is the one that most needs the calming comfort of a friendly pup.

In her later years when her eyesight was failing and dementia began to erode her grey matter, Poppy could forget what door to come in from our backyard. But when you approached from behind, petting her head, she was never surprised or ashamed, just grateful for the attention and company. She rarely barked, and, when she did, she would bark just once to let us know it was time to let her in – a gentle audible reminder that her place was next to us.

I often said that Poppy’s long success was akin to the resilience of Buffalo’s economy and architecture. Unlike boom towns like Vegas or Atlanta, we never sped up, so we never slowed down. Like the “City of No Illusions”, she was not a boom-and-bust dog. Never an ACL tear, never a mass removal. She had a steady-as-you-go and enjoy-each-day kind of presence. Her joints did not start to give way until she reached fourteen.

We discovered Poppy’s secret when we asked her to be a blood donor for a needy patient. Her blood pressure was so low we could not collect blood from her. Her calm demeanor, I conjecture, was partially due to this chronic hypotension (low blood pressure). I believe this is why her kidneys, liver and heart were in perfect health her entire life. We could learn from this lesson.

That is not to say she did not have her agenda. Poppy’s priorities were clear and consistent: Attention, Food and Sleep. She would sit to be petted forever, and with that thick yellow velvet pelt it was hard for anyone to stop. If you did, her nuzzle would let you know and urge you to start back up.

Her nickname around Ellicott was R. Poppy, as I go by R. Reed, but I like to think R. Poppy stood for “Our Poppy”, because she was loved by all who knew her and she loved everyone back . She melted in your hands with her ultra soft fur, and her gentle way melted your heart in return. I write this to and for all who knew and loved Poppy, for those who have ever known a dog like Poppy and for those who haven’t. I often say, “Everyone should have at least one great dog in their life.” Poppy was our great dog.

In the end, it was not her heart nor cancer nor kidneys, it was arthritis. She had all the best science and care. Dr. Nellis did a great job with acupuncture, the treatment team with laser therapy, Rimadyl, joint support, Bright Minds from Purina for cognitive function, behavior consults from Dr. Sickels, Adequan for her joints and many other trials. She was the beta for all new vet products for the aging dog. Despite all our efforts, however, toward the end she was living to avoid pain, and that was no way to live. At 16.5 years, on our 20th wedding anniversary, we told her she did not have be our hero any longer.

In reflecting on Poppy’s long life and feeling grateful for her presence in our lives, I recognize that I could have listened better to her. I could have relaxed more. I could have taken more walks with her and learned to pace myself as she did. But more importantly, what I learned from Poppy are the lessons about others. She taught me that what we are all looking for is to be appreciated. She reminded me to pay attention to others – they may need support. With a pet’s passing, with the heartache of their absence, the best way to honor them is to pay attention to the lessons they were trying to teach us.

To keep you updated and make sure all our clients stay informed during this changing landscape, we will be reaching out with periodic updates.

We use cookies on our website to give you the most relevant experience by remembering your preferences and repeat visits. By clicking “Accept All”, you consent to the use of ALL the cookies. However, you may visit "Cookie Settings" to provide a controlled consent.
Cookie SettingsAccept All
Manage consent

This website uses cookies to improve your experience while you navigate through the website. Out of these, the cookies that are categorized as necessary are stored on your browser as they are essential for the working of basic functionalities of the website. We also use third-party cookies that help us analyze and understand how you use this website. These cookies will be stored in your browser only with your consent. You also have the option to opt-out of these cookies. But opting out of some of these cookies may affect your browsing experience.
Necessary Always Enabled
Necessary cookies are absolutely essential for the website to function properly. This category only includes cookies that ensures basic functionalities and security features of the website. These cookies do not store any personal information.
Non-necessary
Any cookies that may not be particularly necessary for the website to function and is used specifically to collect user personal data via analytics, ads, other embedded contents are termed as non-necessary cookies. It is mandatory to procure user consent prior to running these cookies on your website.
SAVE & ACCEPT