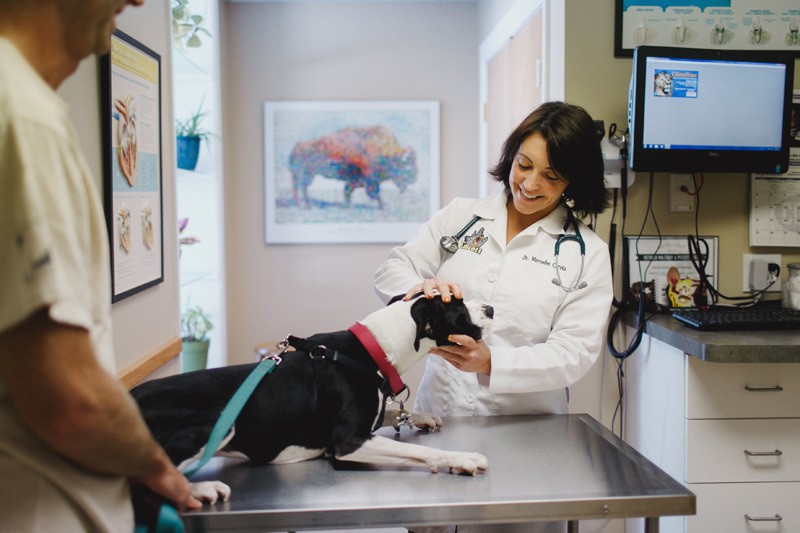 The knee is a fairly complicated joint. It consists of the femur above, the tibia below, the kneecap (or patella) in front, and the bean-like fabellae behind. Chunks of cartilage called the medial and lateral menisci fit between the femur and tibia like cushions. An assortment of ligaments hold everything together, allowing the knee to bend the way it should and keep it from bending the way it shouldn’t.

There are two cruciate ligaments that cross inside the knee joint: the anterior (or, more correctly in animals, cranial cruciate) and the posterior (or, more correctly in animals, the caudal cruciate). They are named for the side of the knee (front or back) where their lower attachment is found. The anterior cruciate prevents the tibia from slipping forward out from under the femur.

The ruptured cruciate ligament is the most common knee injury of dogs. Chances are that any dog that suddenly has rear leg lameness has a ruptured anterior cruciate ligament. The history usually involves a rear leg suddenly so sore that the dog can hardly bear weight on it. If left alone, it will appear to improve over the course of weeks but the knee will be notably swollen and arthritis will set in quickly. Dogs are often brought to the vet in either the acute stage (shortly after the injury) or in the chronic stage (weeks or months later). The key to the diagnosis of the ruptured cruciate ligament is the demonstration of an abnormal knee motion called a drawer sign. It is not possible for a normal knee to show this sign.

The veterinarian stabilizes the position of the femur with one hand and manipulates the tibia with the other hand. If the tibia moves forward like a drawer being opened, the cruciate ligament is ruptured.

Another test that can be used is the tibial compression test where the veterinarian stabilizes the femur with one hand and flexes the ankle with the other hand. If the ligament is ruptured, again the tibia moves abnormally forward.

If the rupture occurred some time ago, there will be swelling on the side of the knee joint that faces the other leg. This is called a medial buttress and is a sign that arthritis is well along.

It is not unusual for animals to be tense or frightened at the vet’s office. Tense muscles can temporarily stabilize the knee preventing demonstration of the drawer sign during examination. Often sedation is needed to get a good evaluation of the knee. This is especially true with larger dogs.

Since arthritis can set in relatively quickly after a cruciate ligament rupture, radiographs to assess arthritis are a good idea. Another reason for radiographs is that occasionally when the cruciate ligament tears, a piece of bone where the ligament attaches to the tibia breaks off as well. This will require repair and the surgeon will need to know about it before beginning surgery.

There are several clinical pictures seen with ruptured cruciates. One is a young athletic dog playing roughly who takes a bad step and injures the knee while playing. This is usually a sudden lameness in a young large breed dog.

On the other hand, an older large dog, especially if overweight, can have weakened ligaments and slowly stretch or partially tear them. The partial rupture may be detected or the problem may not become apparent until the ligament breaks completely. In this type of patient, stepping down off the bed or a small jump can be all it takes to break the ligament. The lameness may be acute but have features of more chronic joint disease or the lameness may simply be a more gradual/chronic problem.

Larger overweight dogs that rupture one cruciate ligament frequently rupture the other one within a year’s time. An owner should be prepared for another surgery in this time frame.

What Happens if the Ruptured Cruciate is Not Surgically Repaired?

Without an intact cruciate ligament, the knee is unstable. Wear between the bones and meniscal cartilage becomes abnormal and the joint begins to develop degenerative changes (arthritis). Bone spurs called osteophytes develop and chronic pain and loss of joint motion result. This process can be arrested by surgery but cannot be reversed.

• Osteophytes are evident as soon as 3 weeks after the rupture in some patients. This kind of joint disease is substantially more difficult for a large breed dog to bear though all dogs will ultimately show degenerative changes. Typically, after several weeks from the time of the acute injury, the dog may appear to get better but is not likely to become permanently normal.

What Happens in Surgical Repair?

The knee joint is opened and inspected. If the meniscus is torn, the damaged portion is removed. A very large, strong suture is passed around the fabella behind the knee and through a hole drilled in the front of the tibia. This tightens the joint to prevent the drawer motion, effectively taking over the job of the cruciate ligament.

•  The dog may hold the leg up for a good 2 weeks after surgery but will increase knee use over the next 2 months, eventually returning to near normal.

• The dog will require 8-10 weeks of exercise restriction after surgery (no running, outside on a leash only including the backyard).

Rehabilitation following surgery can begin as soon as the pet goes home. The area can be chilled with a padded ice pack for 10 minutes a couple times daily. (Do not try to make up for a skipped treatment by icing the area longer; prolonged cold exposure can cause injury). Passive range of motion exercise where the knee is gently flexed and extended can also help. It is important not to induce pain when moving the limb. Let the patient guide you. Avoid twisting the leg. After the stitches or staples are out (or after the skin has healed in about 10-14 days), water treadmill exercise can be used if a facility is available. This requires strict observation and, if possible, the patient should wear a life jacket. Walking uphill or on stairs is helpful for strengthening the back legs but no running, jumping or other “explosive” type exercise should be performed for a full three months after surgery.

We mentioned the meniscus as part of the knee joint. The bones of all joints are capped with cartilage so as provide a slippery surface where the bones contact each other (if the bones contact each other without cartilage, they grind each other down). In addition to these cartilage caps, the stifle joint has two “blocks” of cartilage in-between the bones. These blocks are called the menisci and serve to distribute approximately 65% of the compressive load delivered to the knee. The only other joint with a meniscus is the jaw (tempero-mandibular joint).

When the cruciate ligament ruptures, the medial (on the inner side of the knee) meniscus frequently tears and must be removed. This is generally done at the time of cruciate ligament surgery and we would be remiss not to mention it.

Pets with meniscal damage may have an audible clicking sound when they walk or when the knee is examined, but for a definitive diagnosis the menisci must actually be inspected during surgery. It is difficult to access the menisci and thus repairing a tear in the meniscus is problematic; furthermore, poor blood supply to the menisci also makes good healing less likely. For these reasons, removal of the damaged portion of the meniscus is the most common surgical choice. This leaves some meniscus behind to distribute the compression load on the knee but removes the painful, ineffective portion.

We use cookies on our website to give you the most relevant experience by remembering your preferences and repeat visits. By clicking “Accept All”, you consent to the use of ALL the cookies. However, you may visit "Cookie Settings" to provide a controlled consent.
Cookie SettingsAccept All
Manage consent

This website uses cookies to improve your experience while you navigate through the website. Out of these, the cookies that are categorized as necessary are stored on your browser as they are essential for the working of basic functionalities of the website. We also use third-party cookies that help us analyze and understand how you use this website. These cookies will be stored in your browser only with your consent. You also have the option to opt-out of these cookies. But opting out of some of these cookies may affect your browsing experience.
Necessary Always Enabled
Necessary cookies are absolutely essential for the website to function properly. This category only includes cookies that ensures basic functionalities and security features of the website. These cookies do not store any personal information.
Non-necessary
Any cookies that may not be particularly necessary for the website to function and is used specifically to collect user personal data via analytics, ads, other embedded contents are termed as non-necessary cookies. It is mandatory to procure user consent prior to running these cookies on your website.
SAVE & ACCEPT